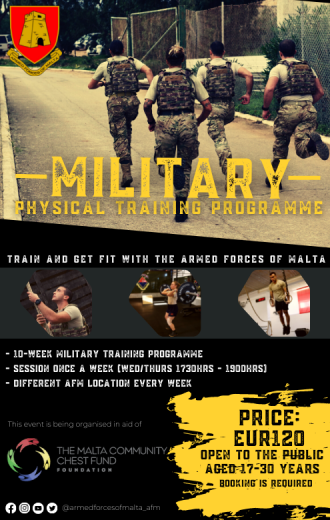 The Armed Forces of Malta is organising a 10-week Physical Training Programme open to anyone between the ages of 17 and 30 years, as a way of promoting a healthy/active lifestyle and also as an introductory fitness base for those interested in applying to join the Armed Forced of Malta.

Number of participants is limited, and bookings will be open until the slots have been filled. This event is being organised in aid of The Malta Community Chest Fund Foundation.

Once your booking is confirmed, you will be receiving an Indemnity Form (Minors or Adults) and Medical Form to the email address provided whilst booking. These forms are to be filled in and signed accordingly. A scanned copy is to be sent as a reply to your email, and forms are to be brought with you to Luqa Barracks on the 12th October 2022, where the first session of the series of training sessions will be held.

Booking was NOT added to cart.